Meet the experienced and friendly doctors and staff who make Vision Source Woodlands the leading provider of vision care products and services in Woodlands. 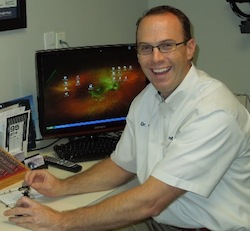 Dr. Gerdts was assigned as Chief, Aerospace Optometry, 2nd Medical Group at Barksdale Air Force Base in Louisiana where his responsibilities included management of all eye conditions for a population of 30,000. He managed the refractive surgery program for active duty personnel, the base occupational and recreational eye safety program, and all aircrew vision care. Dr. Gerdts was twice selected among 48 providers from multiple specialties as the 2nd Medical Group’s provider of the quarter. His tour of duty culminated in him being awarded the Air Force Commendation Medal for superior performance of his duties.

Dr. Gerdts holds a license in Texas and Ohio. He specializes in the diagnosis and treatment of ocular infections, the fitting of toric and multifocal lenses, pediatric optometry, and is adept at diagnosing specific color vision disorders and handling the particular visual requirements of pilots.Dr. Gerdts holds an Optometric Glaucoma Specialist license issued by the Texas Board of Optometry.

Dr. Gerdts and his wife, Karin, have been married since 1995 and have two children.

You can schedule your next appointment with us online!